Code coverage, also called test coverage, tells you which parts of your code are executed by running the unit and integration tests. Code coverage is typically expressed as percent values, for example, 79% statements, 53% branches, 74% functions, 78% lines.

Statements are, broadly speaking, control structures like if and for as well as expressions separated by semicolon. Branches refers to the two branches of if (…) {…} else {…} and … ? … : … conditions. Functions and lines are self-explanatory.

In Angular’s Karma and Jasmine setup, Istanbul is used for measuring test coverage. Istanbul rewrites the code under test to record whether a statement, branch, function and line was called. Then it produces a comprehensive test report.

To activate Istanbul when running the tests, add the --code-coverage parameter:

After the tests have completed, Istanbul saves the report in the coverage directory located in the Angular project directory.

The report is a bunch of HTML files you can open with a browser. Start by opening coverage/index.html in the browser of your choice. 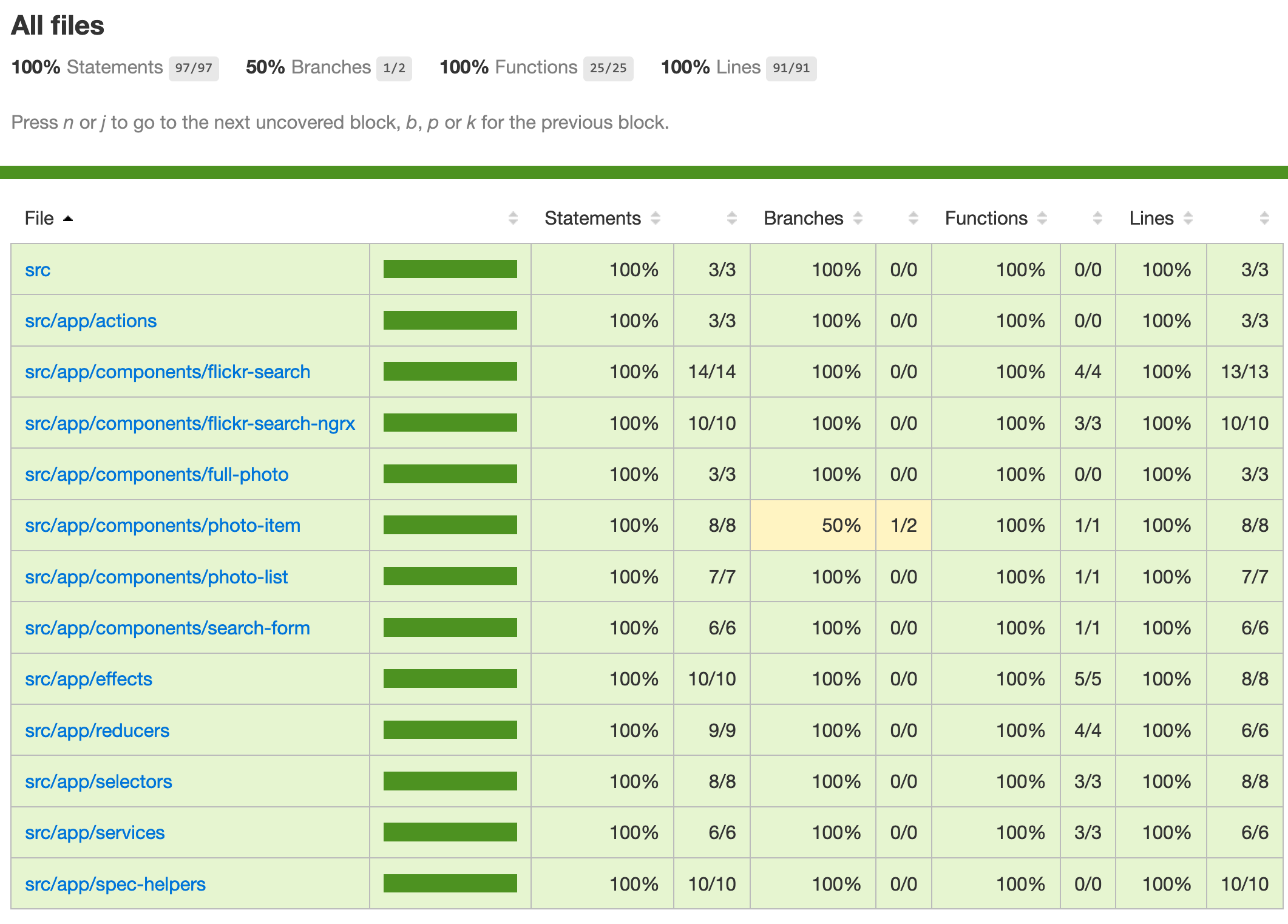 Istanbul creates an HTML page for every directory and every file. By following the links, you can descend to reports for the individual files.

For example, the coverage report for photo-item.component.ts of the Flickr search: 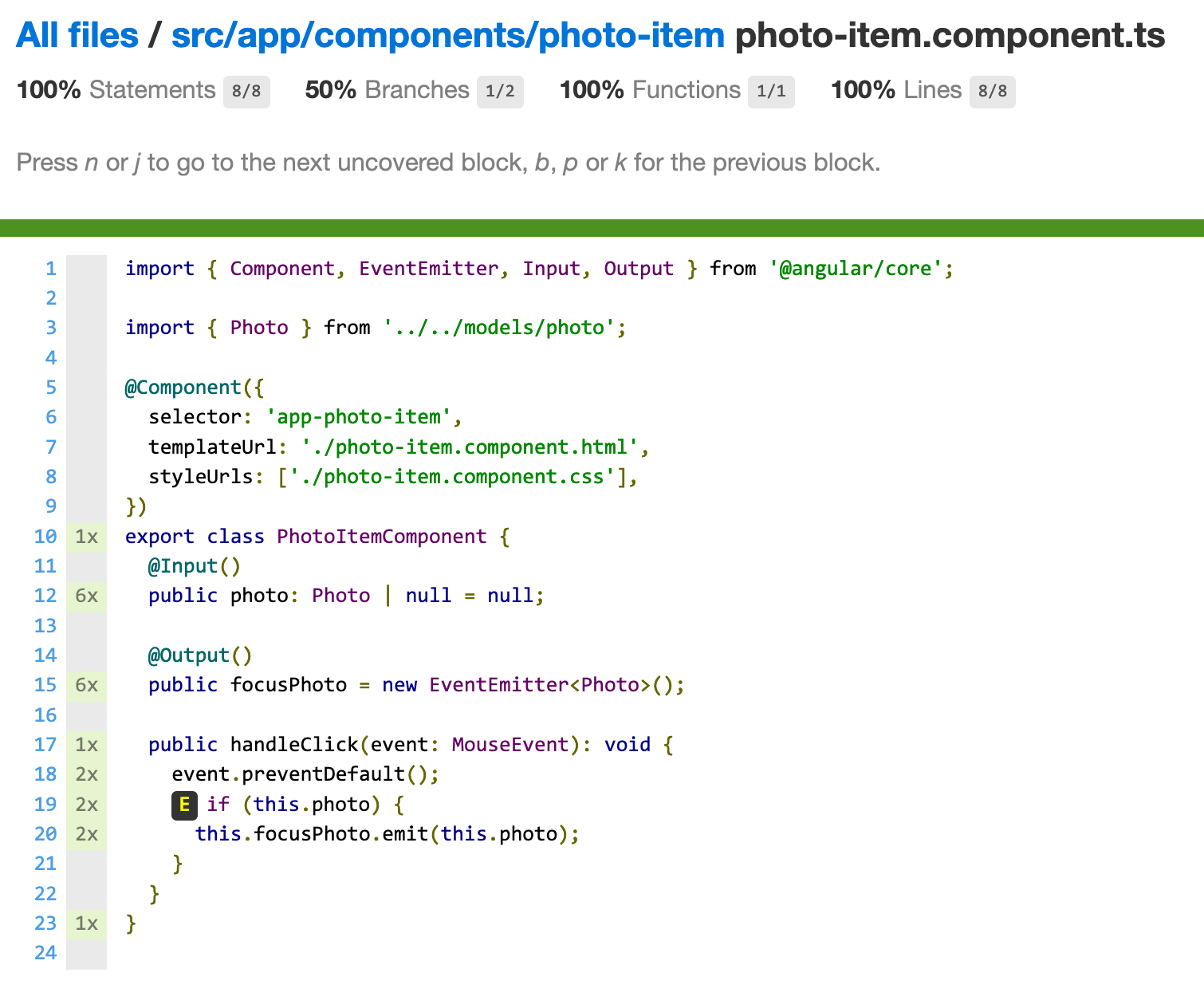 The report renders the source code annotated with the information how many times a line was called. In the example above, the code is fully covered except for an irrelevant else branch, marked with an “E”.

The spec it('focusses a photo on click', () => {…}) clicks on the photo item to test whether the focusPhoto Output emits. Let us disable the spec on purpose to see the impact. 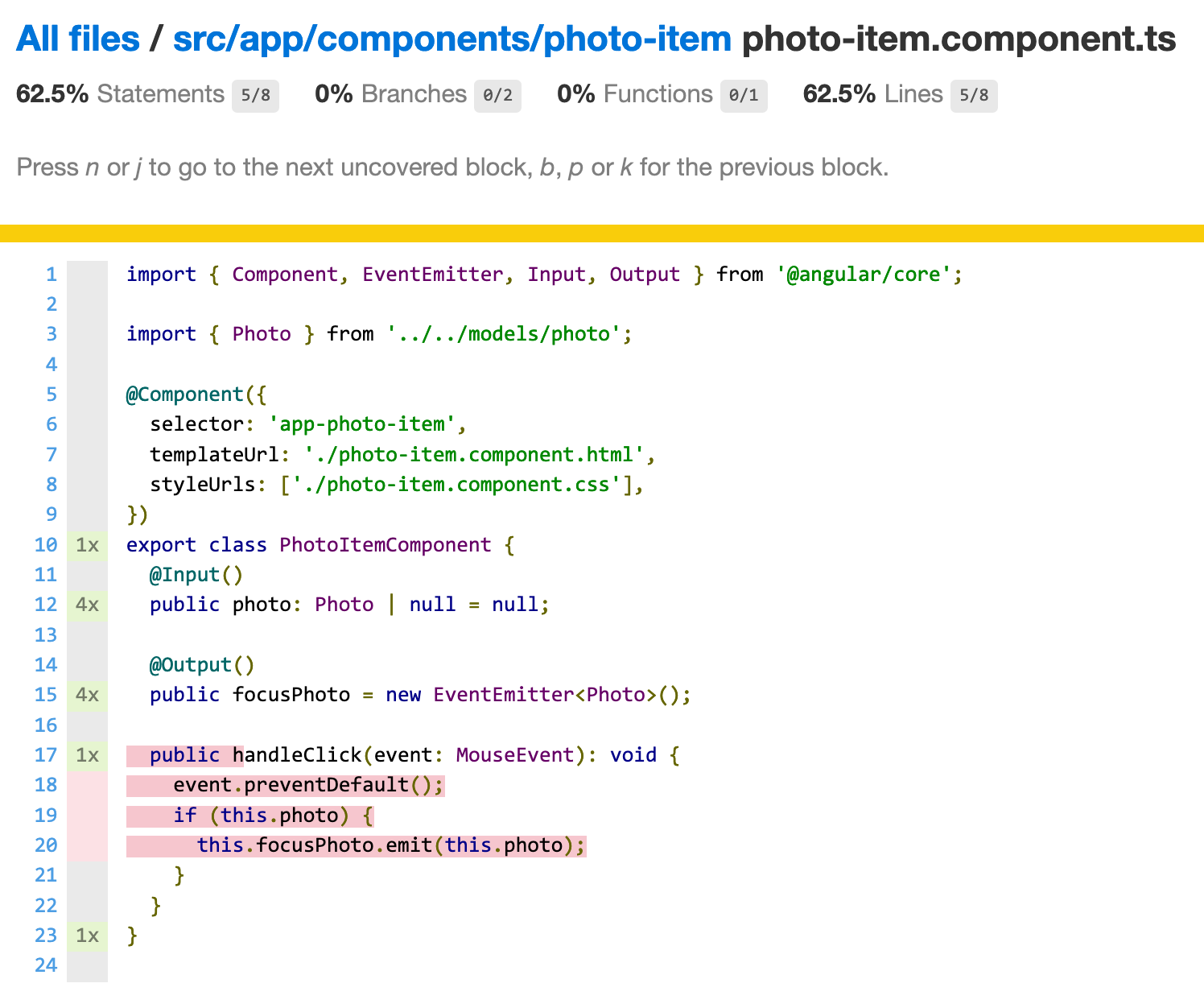 You can tell from the coverage report above that the handleClick method is never called. A key Component behavior is untested.

How to use the coverage report

Now that we know how to generate the report, what should we do with it?

In the chapter The right amount of testing, we have identified code coverage as a useful, but flawed metric. As a quantitative measure, code coverage cannot assess the quality of your tests.

Software testing is not a competition. We should not try to reach a particular score just for the sake of it. For what purpose are we measuring code coverage then?

The coverage report is a valuable tool you should use while writing tests. It reveals code behavior that is not yet tested. The report not only guides your testing, it also deepens your understanding of how your tests work.

Whatever your current coverage score is, use the reporting to monitor and improve your testing practice. As described in Tailoring your testing approach, testing should be part of the development routine. New features should include tests, bug fixes should include a test as proof and to prevent regressions.

Writing new code and changing existing code should not lower the coverage score, but gradually increase it. This means if your existing tests cover 75% lines of code, new code needs to be at least 75% covered. Otherwise the score slowly deteriorates.

It is common practice to run the unit and integration tests in a continuous integration environment and measure the code coverage. To enforce a certain coverage score and to prevent decline, you can configure thresholds in the Karma configuration.

In karma.conf.js, you can add global thresholds for statements, branches, functions and lines.

In the configuration above, all values are set to 75%. If the coverage drops below that number, the test execution fails even if all specs succeeded.

When new code is added to the project with a test coverage better than average, you can raise the thresholds slowly but steadily – for example, from 75 to 75.1, 75.2, 75.3 and so on. Soon these small improvements add up.

Test coverage should not be a pointless competition that puts developers under pressure and shames those that do not meet an arbitrary mark. Measuring coverage is a tool you should use for your benefit. Keep in mind that writing meaningful, spot-on tests does not necessarily increase the coverage score.

For beginners and experts alike, the coverage report helps to set up, debug and improve their tests. For experienced developers, the score helps to keep up a steady testing practice.