In contrast to other popular front-end JavaScript libraries, Angular is an opinionated, comprehensive framework that covers all important aspects of developing a JavaScript web application. Angular provides high-level structure, low-level building blocks and means to bundle everything together into a usable application.

An important reason is testability. Angular’s architecture guarantees that all application parts can be tested easily in a similar way.

We know from experience that code that is easy to test is also simpler, better structured, easier to read and easier to understand. The main technique of writing testable code is to break code into smaller chunks that “do one thing and do it well”. Then couple the chunks loosely.

This division of work decouples an application part from its dependencies: One part does not need to know how to set up a dependency, let alone the dependency’s dependencies and so forth.

Dependency injection turns tight coupling into loose coupling. A certain application part no longer depends on a specific class, function, object or other value. It rather depends on an abstract token that can be traded in for a concrete implementation. The injector takes the token and exchanges it for a real value.

This is of immense importance for automated testing. In our test, we can decide how to deal with a dependency:

A large portion of the time spent while writing tests is spent on decoupling an application part from its dependencies. This guide will teach you how to set up the test environment, isolate an application part and reconnect it with equivalent fake objects.

Angular provides solid testing tools out of the box. When you create an Angular project using the command line interface, it comes with a fully-working testing setup for unit, integration and end-to-end tests.

The Angular team already made decisions for you: Jasmine as testing framework and Karma as test runner. Implementation and test code is bundled with Webpack. Application parts are typically tested inside Angular’s TestBed.

This setup is a trade-off with strengths and weaknesses. Since it is just one possible way to test Angular applications, you can compile your own testing tool chain.

For example, some Angular developers use Jest instead of Jasmine and Karma. Some use Spectator or the Angular Testing Library instead of using TestBed directly.

These alternatives are not better or worse, they simply make different trade-offs. This guide uses Jasmine and Karma for unit and integration tests. Later, you will learn about Spectator.

Once you have reached the limits of a particular setup, you should investigate whether alternatives make testing your application easier, faster and more reliable.

Angular offers some tools and conventions on testing. By design, they are flexible enough to support different ways of testing. So you need to decide how to apply them.

This freedom of choice benefits experts, but confuses beginners. In your project, there should be one preferable way how to test a specific application part. You should make choices and set up project-wide conventions and patterns.

The testing tools that ship with Angular are low-level. They merely provide the basic operations. If you use these tools directly, your tests become messy, repetitive and hard to maintain.

Therefore, you should create high-level testing tools that cast your conventions into code in order to write short, readable and understandable tests.

This guide values strong conventions and introduces helper functions that codify these conventions. Again, your mileage may vary. You are free to adapt these tools to your needs or build other testing helpers.

Running the unit and integration tests

The Angular command line interface (CLI) allows you to run the unit, integration and end-to-end tests. If you have not installed the CLI yet or need to update to the latest version, run this command on your shell:

This installs Angular CLI globally so the ng command can be used everywhere. ng itself does nothing but exposing a couple of Angular-specific commands.

The command for starting the unit and integration tests is:

This command does several things at once.

First, ng test uses Webpack to compile your code into a JavaScript bundle. The entry point for the bundle is src/test.ts. This file initializes the Angular testing environment – the TestBed – and then imports all files in the directory tree that match the pattern .spec.ts.

You might be familiar with the entry point for the application, src/main.ts. This file also initializes Angular, but then it typically bootstraps (loads and starts) the AppModule. The AppModule imports other Modules, Components, Services, etc. This way, the bundler finds all parts of the application.

The test bundle with the entry point test.ts works differently. It does not start with one Module and walks through all its dependencies. It merely imports all files whose name ends with .spec.ts.

Each .spec.ts file represents a test. Typically, one .spec.ts file contains at least one Jasmine test suite (more on that in the next chapter). The files are co-located with the implementation code.

Karma then launches one or more browsers. The idea of Karma is to run the same tests in different browsers to ensure cross-browser interoperability. All widely used browsers are supported: Chrome, Internet Explorer, Edge, Firefox and Safari. Per default, Karma starts Chrome.

The launched browser navigates to http://localhost:9876/. As mentioned, this site serves the test runner and the test bundle. The tests start immediately. You can track the progress and read the results in the browser and on the shell.

When running the tests in the counter project, the browser output looks like this: 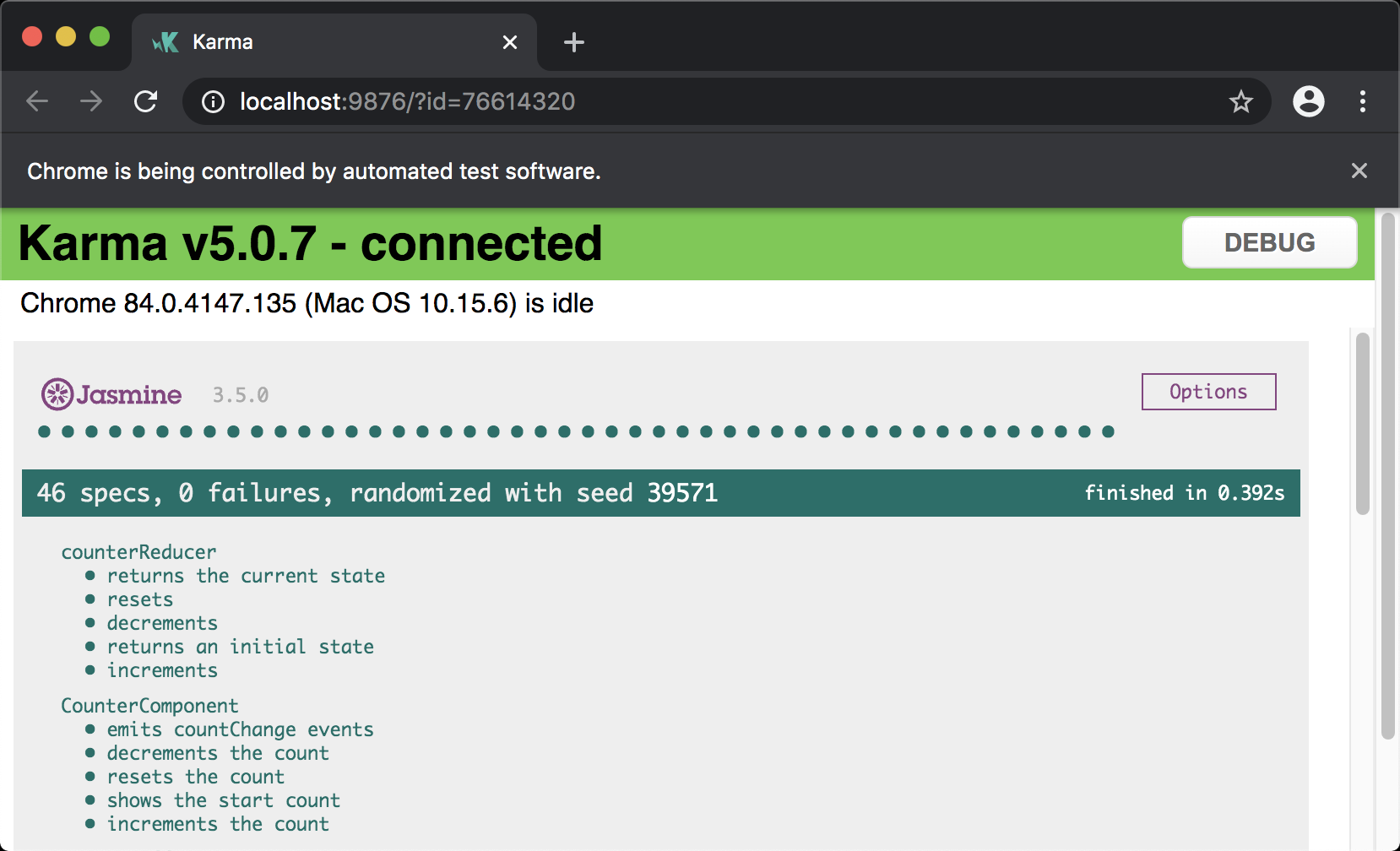 This is the shell output:

Karma and Jasmine are configured in the file karma.conf.js in the project’s root directory. There are many configuration options and plenty of plugins, so we will only mention a few.

As mentioned, the standard configuration opens Chrome. To run the tests in other browsers, we need to install different launchers.

The launcher needs to be loaded in the plugins array:

There is already one launcher, karma-chrome-launcher. This is an npm package.

To install other launchers, we first need to install the respective npm package. Let us install the Firefox launcher. Run this shell command:

Then we require the package in karma.conf.js:

Another important concept of Karma are reporters. They format and output the test results. In the default configuration, three reporters are active:

By editing the reporters array, you can add reporters or replace the existing ones:

For example, to add a reporter that creates JUnit XML reports, first install the npm package:

Next, require it as a plugin:

When we run the tests with ng test, we will find an XML report file in the project directory.

The configuration for the Jasmine adapter is located in the client object. To configure Jasmine itself, we need to add the jasmine property:

This guide recommends to activate one useful Jasmine configuration option: failSpecWithNoExpectations lets the test fail if it does not contain at least one expectation. (More on expectations later.) In almost all cases, specs without expectations stem from an error in the test code.